UPPER EAST SIDE — A candidate for Jessica Lappin's City Council seat has cast himself as a progressive and government reformer who welcomes a battle with challengers he claims are backed by the political establishment. 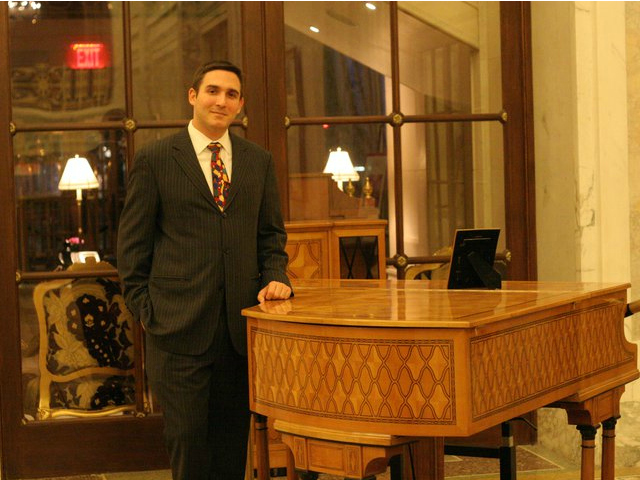 Benjamin Kallos — one of several candidates vying for the District 5 City Council seat — has touted himself as a political outsider since launching his campaign last year.

"While no other candidates really have a platform, you can go to my website and we've got over 120 different positions," Kallos said. "They're not ideas. They're actually solutions on how to fix things. It's, 'Here's a problem we've identified, and here's a proposed solution — let's discuss how to fix it!'"

Kallos' views and approach have pitted him against, among others, Assemblyman Micah Kellner, who has already landed endorsements from Lappin and Congresswoman Carolyn B. Maloney.

Kellner's campaign, however, maintains he is independent and an advocate for the average New Yorker.

"Every day, Assembly Member Micah Kellner is fighting for people who don't have the backing of a special interest group or corporate money," the campaign said in a statement. "That's why he wrote the most comprehensive anti-corruption legislation in state history — so ordinary New Yorkers' voices can be heard.

"Micah has stood up to the political establishment and powerful interests time and time again," his campaign added. "He has a record to prove it."

Still, Kallos insists his platform stands in stark contrast to his opponents — including vocal opposition to stop-and-frisk practices in the local 19th Precinct, he said. Cops in that precinct performed 5,250 stop-and-frisks in 2011, targeting minorities 76 percent of the time, despite people of color making up less than a fifth of the neighborhood's population, according to recent NYPD statistics.

The stops are so disproportionate, Kallos said, that he has threatened to organize a protest in front of the 19th Precinct stationhouse.

"No one wants to see their friends, colleagues, co-workers and customers stopped just because of the color of their skin," Kallos said in a recent interview. "Being harassed by police by being stopped, being told that you meet the description of someone who committed a crime in the neighborhood, it's not a sustainable model of community policing."

Beyond threats of picketing the stationhouse, Kallos says his views are more in line with the community's concerns.

"I could go to any place in the world and run on taxes, on education, and affordable housing. Those are the core issues," he said. But "on the Upper East Side, the top three issues are the Marine Transfer Station, Second Avenue Subway and Cornell-New York City Tech."

Kallos, now a triathlete, said that he supports Asphalt Green's protests against the planned East 91st Street Marine Transfer Station. The sports complex, where he is a member, helped him overcome being clinically overweight with its triathlon training program, he said.

And Kallos wants to extend the same opportunities to area residents, including at-risk youth.

"We are serving a greater community there," he said.

In addition, Kallos supports grants for businesses affected by Second Avenue Subway construction and he wants to minimize Cornell-Tech construction impact on Roosevelt Islanders by transferring construction materials by boat, according to his website.

Kallos' platform hasn't appeared to have hurt him politically. He has raised $47,939 — putting him in the fundraising lead for District 5 field, according to the most recent New York City Campaign Finance Board documents available.

Meanwhile, Kallos says he was part of a political establishment of his own years ago when he was chief of staff for former Assemblyman Jonathan Bing. He shifted course after making a public records request for Assembly, Senate and City Council members' voting records and putting them online via the Open Government Foundation, he said.

"You don't put everybody's voting record online and all of a sudden one day wake up and say, 'Oh my god, they love us for betraying them,'" he acknowledged.

Kallos added he is not worried about coming across as too progressive for the area.

"No matter how progressive they might seem, at the end of the day, all these issues come back to improving the lives of constituents," he said. "I think it will resonate with the Upper East Side."