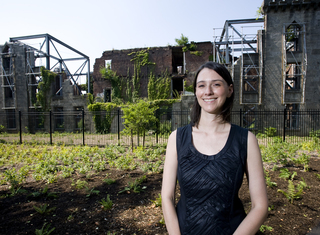 MANHATTAN — Upper East Side City Councilwoman Jessica Lappin has already amassed a war chest of $600,000 for her potential 2013 run for Manhattan Borough President — leaving the door open for suitors eyeing her Council seat.

As she gears up for the borough-wide race — assuming that current BP Scott Stringer runs for mayor — possible contenders for her district seat are already emerging.

State Assemblyman Micah Kellner is rumored to be considering the post, and Assemblyman Jonathan Bing’s former chief of staff, Ben Kallos, told Politicker last week that he’ll “absolutely” campaign for the seat if Lappin vacates it. 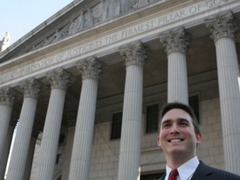 Ben Kallos has said that he plans to run for City Councilman Jessica Lappin's seat, pending the borough president's seat is open for her run. (Facebook/Ben Kallos)

Kallos, a lawyer who is now the executive director at the New Roosevelt Initiative focusing on government-transparency projects, told DNAinfo that he hopes to bring his progressive bent to the council. A self-avowed wonk, Kallos has worked on open source and other campaigns to make government more responsive.

He, for instance, would like to see the city’s text message alert system not only send missing person notices, but also send reminders for Election Day.

He envisions using the office not only for passing legislation, but also, perhaps, like Bronx state Senator Gustavo Rivera, for conducting community civics classes.

“I’ve spent all this time asking for elected officials to do all these things,” Kallos, a former Community Board 8 member, said. “At a certain point, you have to put up or shut up,” he said of his rationale to run.

Kallos has filed paperwork to run for the seat, but hasn’t raised anything yet for this election cycle, according to Campaign Finance Board records.

The 30-year-old, third-generation Upper East Sider had hoped to run in 2009, when Lappin was considering a possible bid for public advocate before term limits were abolished, and raised $4,000 after a day of phone calls back then, with a median donation of $10, he noted of his short-lived grassroots effort.

Kellner  hasn't filed anything with the city’s finance board and his office would not confirm whether he’s looking at City Council.

"We talked about it," Kallos said of a recent breakfast the two had. “Right now, he wants to be an Assembly member. We’ll see what happens with the Assembly and the Senate. … They are one of 150 members in the Assembly, so it’s limited in what certain Assembly members can do."

Assembly Member Micah Kellner (second from right) next to DOT Commissioner Janette Sadik-Khan and with Council woman Jessica Lappin (on far left) at a ribbon-cutting for the E. 78th Street bridge this month. Kellner is rumored to be considering Lappin's seat. (DNAinfo/Amy Zimmer)

Kallos noted that Kellner recently got married and might not want to make the frequent trip to Albany.

"I hope to do City Council," Kallos said. "If Micah is interested, I’m sure we can work something out."

Before Kellner won a special election for the State Assembly in 2007, he was an aide to Sen. Chuck Schumer and was the community liaison to the Upper East Side and Roosevelt Island for Rep. Carolyn Maloney and city Comptroller Bill Thompson.

Kellner traces his political activism back to his days as an undergrad at NYU, when he became active on behalf of the disabled community, his bio says. Kellner, who was diagnosed with cerebral palsy as an infant and underwent many operations and years of physical therapy, has become a leading voice in New York on disability issues.

As an openly bisexual politician, Kellner has also been a leader on LBGT issues.

A spokesperson for Kellner said he is “focused on serving the Upper East Side and Roosevelt Island by fighting for fairer school funding, creating greater transparency in government and finding innovative ways to stimulate the economy and put New Yorkers back to work."

Lappin’s spokeswoman confirmed that she is eying the Manhattan Borough President’s office but hasn’t officially declared since Stringer hasn’t yet declared a mayoral run.

"She has the most cash on hand right now," Lappin’s spokeswoman noted, referring to other possible borough president contenders.

Lappin raised roughly $400,000 so far for the 2013 election cycle and carried over the rest from her previous campaign fundraising efforts.

Julie Menin, chairwoman of lower Manhattan’s Community Board 1 — who also hasn’t officially declared but has announced her intention to run for the borough presidency — has raised nearly $480,000, according to New York City Campaign Finance Board filings.

Both women’s contributions blow away the amount raised by Harlem City Councilman Robert Jackson, who has also said he’s looking at the borough president’s office. He’s only raised roughly $10,000 this election cycle, finance board filings show.