The Upper East Side now has 1,122 pre-K seats compared to just 154 seats in 2014. As you may have read in The Wall Street Journal, we secured these seats following the passage of Local Law 72 of 2018, and our constant advocacy as a community, including a rally with elected officials from all over the city. I’ve been proud to join the School Construction Authority, elected officials, real estate developers, and the workers who built the sites to open 90 seats at 1683 Third Avenue and 144 seats at 252 East 57th Street in 2018, and 180 seats at 355 East 76th Street in 2019. 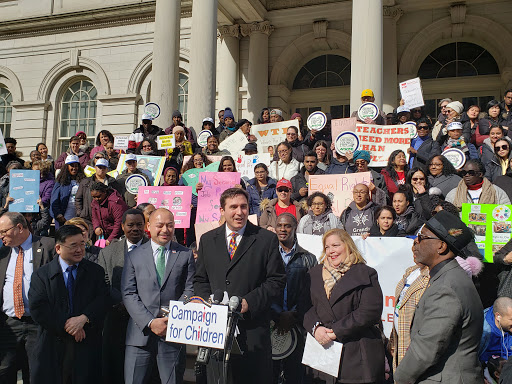 One challenge since the beginning has been that teachers working for community-based providers were paid less than their counterparts at public schools, making our expansion more challenging. Ben was proud to advocate for and win equal funding for these programs.

After this win in 2018, we began our fight for Universal 3-K. In 2017, Mayor Bill de Blasio announced the roll out of "3K for All" by the 2021 school year. As of last year, 3K for All is only planned for half of school districts, serving only two-fifths of children, leaving an estimated 39,000 children without 3K throughout our city. As a Council Member and as the next Borough President I will win 3K for All.