As the New York Daily News reported, we are connecting the East River Esplanade at 60th Street to Sutton Place Park South as we continue to expand parkland in our district in support of a 32-mile contiguous park around the island of Manhattan—the "Green Ring." The Mayor announced $100 million in funding in 2017 and unveiled designs last year. This project will connect a combined 1,000 acres of open space in both directions on the East River Esplanade and create a new greenway by adding additional acres of park space. Soon my constituents and I will finally be able to run, bike, or walk the entire length of my district from Midtown East to East Harlem.

We have now secured a total of $275 million dollars for the East River Esplanade: As the Upper East Side Patch reported, we also cut the ribbon on a $15 million public/private partnership with Rockefeller University stemming from their new building over the FDR has resulted in $15 million for a new East River Esplanade from 64th - 68th Street, repaired seawalls, and a $1 million trust for maintenance in perpetuity. Visit the new Esplanade with improved landscaping, new seating and lighting, designated bike lanes, and a new noise barrier along the FDR Drive for a more peaceful park.

The Rockefeller University also made a $150,000 gift to Friends of the East River Esplanade, a grass-roots conservancy dedicated to the restoration and renovation of the Esplanade from 60th to 120th Streets. Watch coverage of the ribbon cutting at BenKallos.com/Videos or from New York 1. In 2015, I created a public/private partnership with the Hospital for Special Surgery to renovate the Esplanade from 70th to 72nd Street. HSS also agreed to develop a Master Plan for the East River Esplanade from 62nd Street to 78th Street, in partnership with Rockefeller University, and to add noise barriers, a water fountain and irrigation to keep plants alive, new planting beds, improved lighting, repaired railings, and new seating and paving, all with a commitment to maintenance in perpetuity.

For more information read coverage on Patch, the release, or watch the press conference at BenKallos.com/videos We cut the ribbon on the East 81st Street pedestrian bridge, connecting the upper Esplanade and John Finley Walk to the lower esplanade. The $16 million-dollar project replaced the decrepit stairwell built half a century ago. The new bridge isn't just a ramp, but an amenity in and of itself with glass viewing portals, rest points, and a garden below. The new pedestrian bridge features glass walls to preserve beautiful views of the East River, stainless steel railings and fencing, fresh concrete and new bridge bearings. For more information on the project, read the release at BenKallos.com/Press-Releases After two years of negotiations, we secured another public-private partnership with an investment of over $1 million from Brearley to rehabilitate its overhang and maintain it in perpetuity. The plan includes colorful new designs, contemporary lighting, green walls, new planters, and a partnership with a local conservancy. For more information, read the reporting from Our Town, the release at BenKallos.com/Press-Releases, or coverage in Patch. The 90th Street Pier, which was closed to the public, only visible through the bars of a gate, is now a public park. Following my advocacy in partnership with Friends of the East River Esplanade, other East Side elected officials, the Department of Transportation, and NYC Parks, we were able to add more than 3,000 feet of park space to the East River Esplanade.

Read more about the new 90th Street Pier Park in the Upper East Side Patch and Manhattan Express. After years of working to secure $3.5 million dollars for a brand new playground, with $2.5 million from my office and the City Council and $775,000 from Manhattan Borough President Gale Brewer, we broke ground on the project to renovate Carl Schurz Park Playground.

This new playground will feature a more vibrant design thanks to improved play equipment, additional swings, a new sprinkler, new game tables, plantings, and benches. The smaller Catbird Playground at the north end of the playground will remain open during the renovation. The new playground will also have ADA-accessible ramps connecting Catbird with the larger playground.  For more information about the yearlong project, read the press release, watch the groundbreaking at BenKallos.com/videos, or check out coverage by Upper East Side Patch. A nearly $1 million investment in John Jay Pool brought upgrades to this highly trafficked public swimming spot on 77th and Cherokee. I joined Parks Department officials to cut the ribbon at John Jay Park's outdoor pool where the pool filtration system was replaced with a new state-of-the-art system that improves reliability and reduces energy use for years to come. For more information on the pool’s reopening, visit nycgovparks.org/parks/john-jay-park-and-pool. When the basketball court at John Jay Park fell into bad condition, Upper East Side dad Greg Davis, whose two sons play basketball at the park, wouldn’t take no for an answer. Over the course of four years, Greg Davis had nearly perfect attendance at more than 40 monthly First Friday meetings with me from 8am to 10am. Each month, Greg shared with me the work he and my staff had done: several 311 requests and direct advocacy with Community Board 8 and the Parks Department. Greg succeeded in getting improvements done by the Parks Department, with newly painted playing lines, a smooth playing surface, and three new polycarbonate backboards with shooting squares and nets. Read the release on the new courts at BenKallos.com/press-release, watch the announcement at BenKallos.com/videos. You can also read the coverage from Upper East Side Patch. 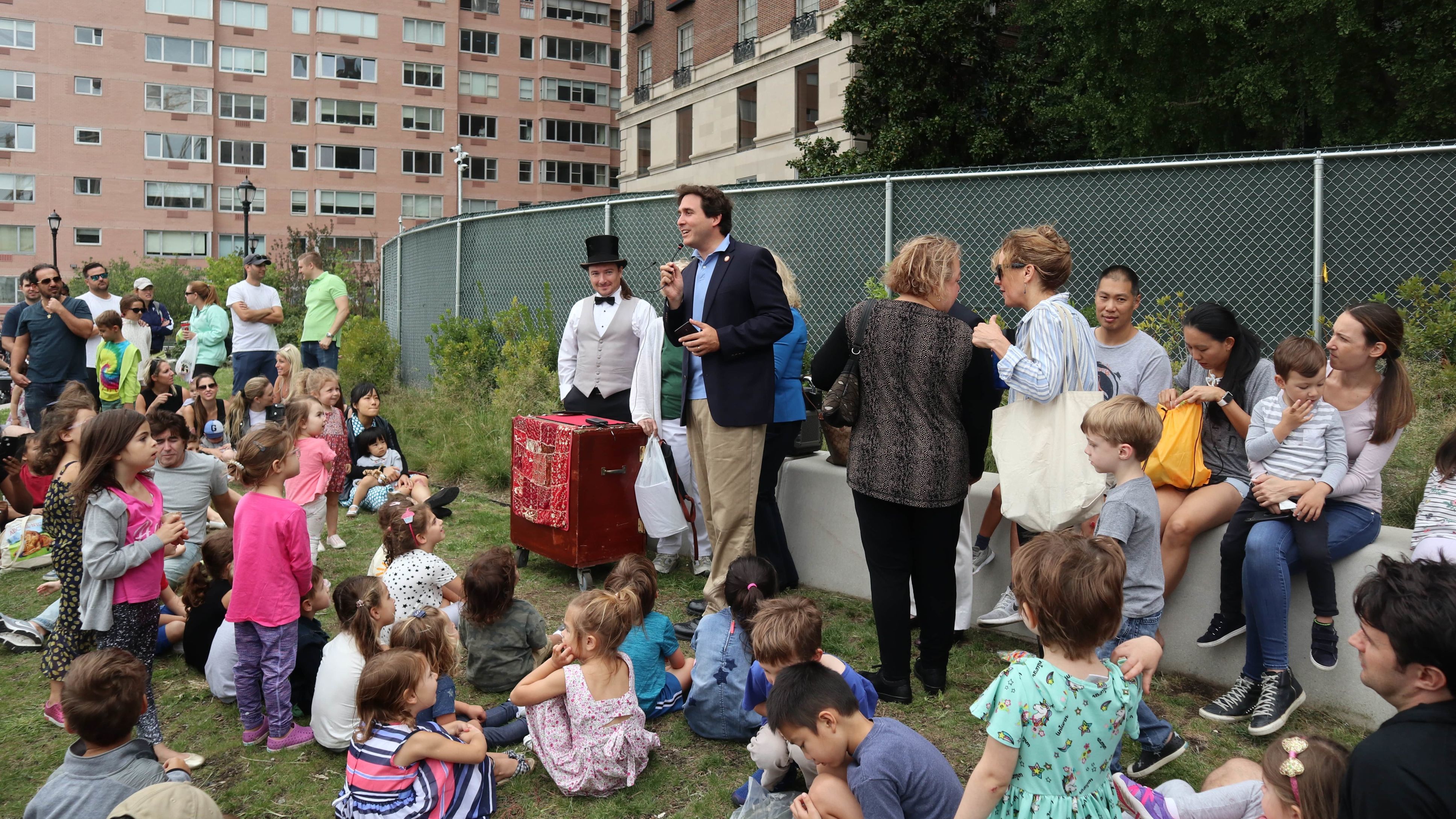 The new Sutton Place Park is open! The long-awaited opening was attended by dozens of children and families, and members of the Sutton Area Community and Sutton Place Park Conservancy. The new park, which came at a total cost of $2.875 million, was built atop a deck over the F.D.R. Drive on what was once a private garden. It connects two small parks at 56th and 57th Streets, adding some 10,000 square feet of park space.

The new green space is the result of a collaboration between the Parks Department and 1 Sutton Place South, which subdivided its private garden in order to provide more park space for the community. I am proud of the work my office did to push the construction of this park along, but we must thank those who fought for years to make this happen. For more information on the new Sutton Place Park, read prior coverage in Our Town or check out the release at BenKallos.com/releases 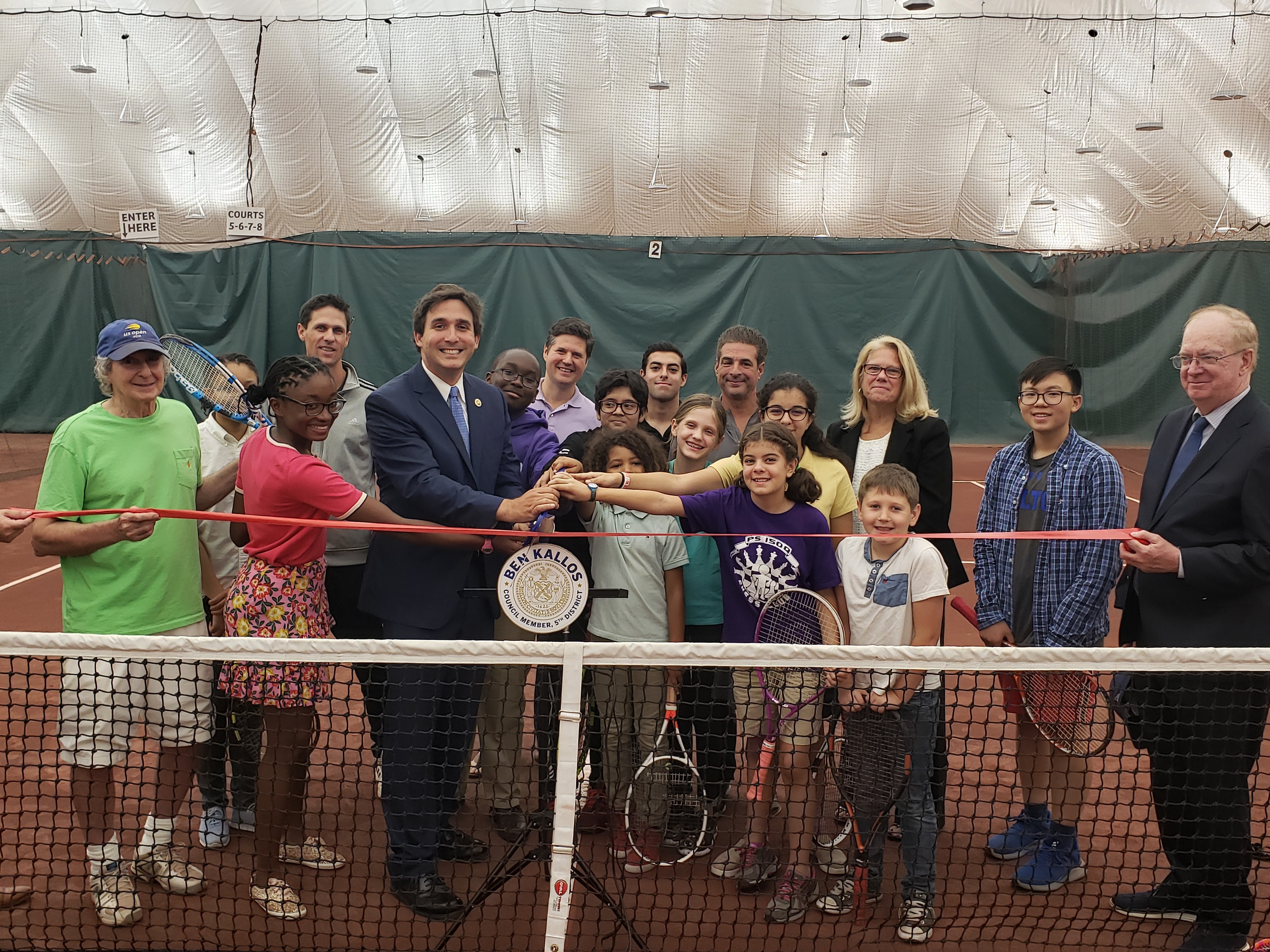 The Queensboro Oval now has expanded summer programming for the public and more affordable drop-in hours. The new programming began Father’s Day 2019 to mark the beginning of a more accessible Oval for all New Yorkers. The change comes after years of our advocacy alongside my fellow elected officials and Community Board 8. The Parks Department listened to our concerns that the prices at the tennis club were expensive and that public access should be the top priority when awarding the next contract. Some of the victories we won for the community include:

My advocacy to fix this issue involved supporting a rally at the space in 2016 organized by Community Board 8 members Susan Evans and Peggy Price. I also wrote a letter to the Parks Department in which I raised several concerns and testified before the Franchise and Concession Review Committee (FCRC) and the Parks Department. Now that Parks has awarded the new contract and listened to many of my requests on behalf of residents. For more info on the tennis program, visit nycgovparks.org/parks/queensboro-oval/facilities/tennis


$1.4 Million for New Security Cameras in Hard to Patrol Parks 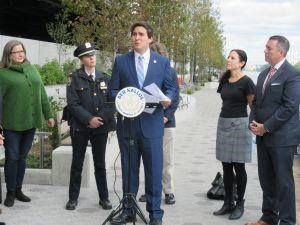 As the New York Daily News reported, at the request of neighborhood organizations and residents, my office allocated $1.4 million funding for the City to install security cameras in hard-to-patrol public spaces along the East River Esplanade. The locations for the cameras were chosen in consultation with community organizations and the NYPD following a positive vote by hundreds of residents in Participatory Budgeting. Locations of new security cameras:

The cameras are linked directly to the 19th Precinct using fiber optics and the innovative ARGUS system with the intention to provide immediate police responses to criminal activity. In fiscal year 2020 additional cameras were funded/

For more details on the new cameras along the East River Esplanade and on East 86th Street be sure to read Patch’s coverage or watch the press conference at BenKallos.com/videos. 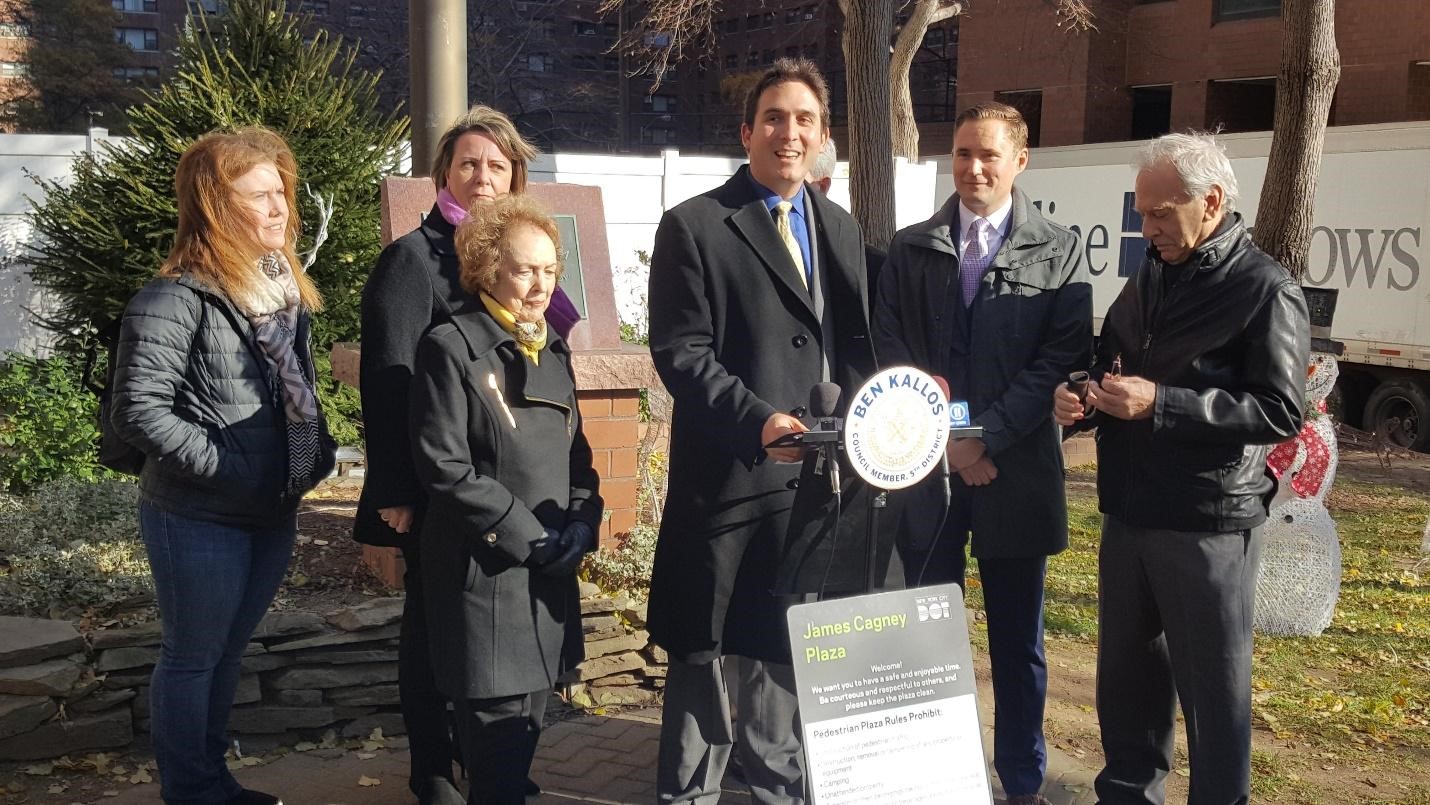 Six years ago when I was elected, I promised I would protect as much open space as possible on the Upper East Side. This is why I was proud to officially designate James Cagney Place, which has been closed off from traffic since I was a boy, as an official Pedestrian Plaza!

Thank you to Community Board 8 Members Rita Popper and David Rosenstein, R-Y Management, and the Department of Transportation for their partnership in making this happen. The Plaza now holds great events including a New Year’s Eve Fun Run. You can even watch the tree lighting and sing-along that I attended with Assembly Member Dan Quart. For more information on the work that went into accomplishing this, read the release or read the coverage in Our Town and Patch.


Launching and Supporting Conservancies with a Quarter Million Dollars 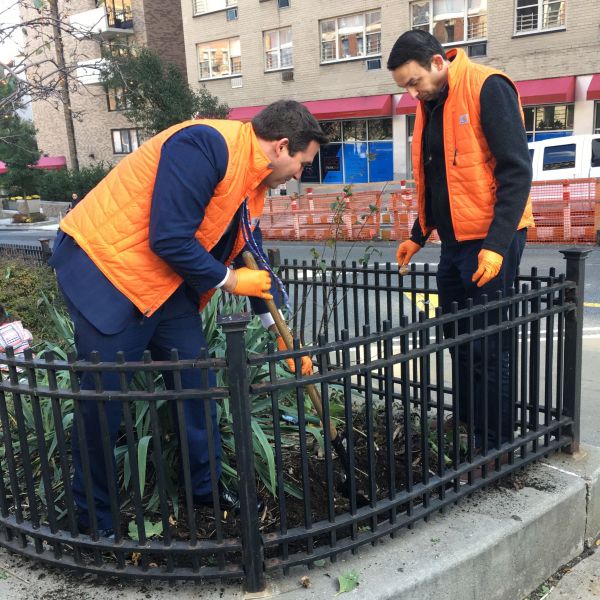 There is less park space per resident on the Upper East Side than almost anywhere else in the City, which means we need to invest in and care for every inch. I’ve been proud to help fund or support numerous conservancies, including for:

Revitalizing the Waterfront Management Advisory Board 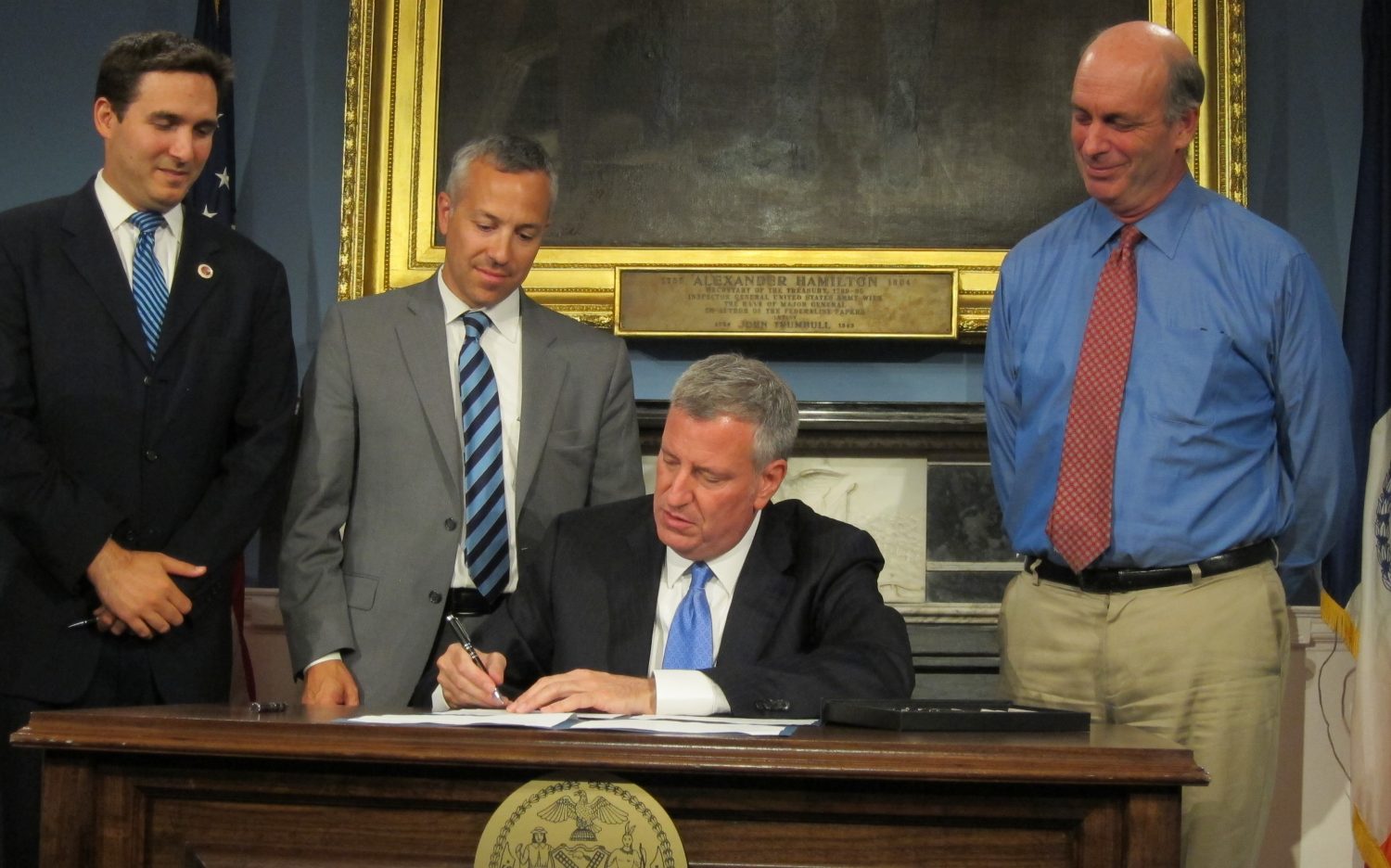 As sea levels rise and New York City continues to recover from Hurricane Sandy, we need to do as much as we can to protect our City from the dangers of climate change. In 2016, legislation I introduced to revive the Waterfront Management Advisory Board became law. This legislation reconstituted the board's role, ensuring it plays an important part in advising New York City on how to best revitalize and protect our 520 miles of shoreline. Under the new law, membership to the board is expanded to include more diverse voices, as well as every level of government. Read the law and release with the full list of benefits, and coverage by SiLive.com